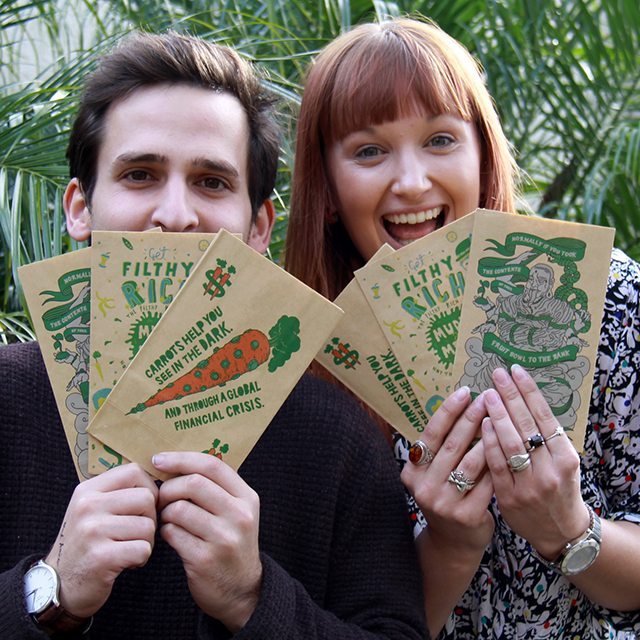 Meet Liz and Nick. They’re two of my friends who work alongside me at DDB. They’re a creative duo in the business of turning problems into opportunities and doing so in inspiring and engaging ways. When they came across the chance to draw awareness to help Mother Earth, they came up with a brilliant way to get people to see the value of their food scraps. Introducing, the We Compost Weekend. 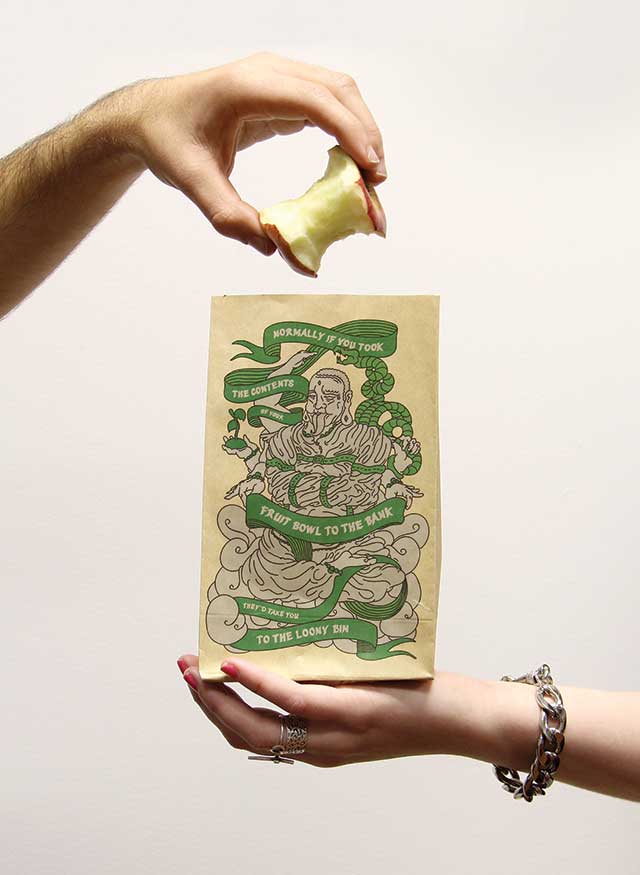 We Compost Weekend – what’s this all about?
Organic waste isn’t really waste at all, it’s a pretty awesome resource. But it’s one we keep throwing away. The problem is that people don’t see the value in it. Even just talking to people we know, it’s ridiculous how many of us just see our food scraps as a dirty, smelly mess that we put throw away with our regular rubbish. We want to change that. So for one weekend, we’re literally turning organic waste into currency that can be used to pay for stuff all over Auckland.

How does Auckland currently stack up on our rubbish habits?
Auckland doesn’t have kerbside collection for food waste yet and it’s still a few years off. So currently about 1/3 of what we send to landfill is actually organic. That’s enough food scraps to fill 125 Olympic swimming pools. Crazy.That’s really bad for the environment, and it’s also a massive waste of money. All that waste could be turned into compost which has a whole heap of benefits for the environment and for farming. Like growing the avocados you enjoy on your morning Vogels. 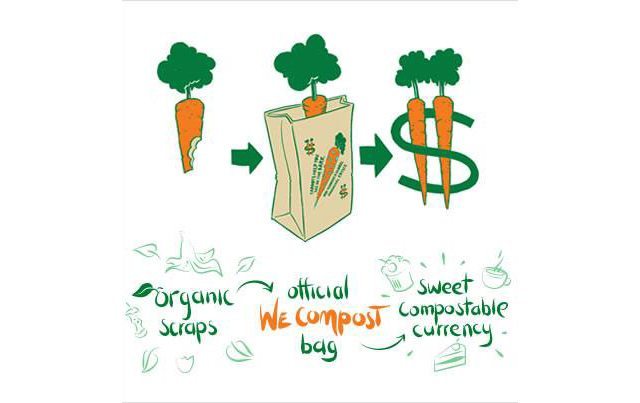 How did the idea come about?
Last year, we found out about this awesome business We Compost. They go round collecting organic waste from cafes and restaurants in Auckland. They’re doing a pretty sweet job cutting down what gets sent to landfill, as are the businesses subscribe to the service. So we wanted to collaborate with them and the other businesses to do draw attention to the good work they’re doing. And also shed some light on the issue of organic waste for Auckland city. 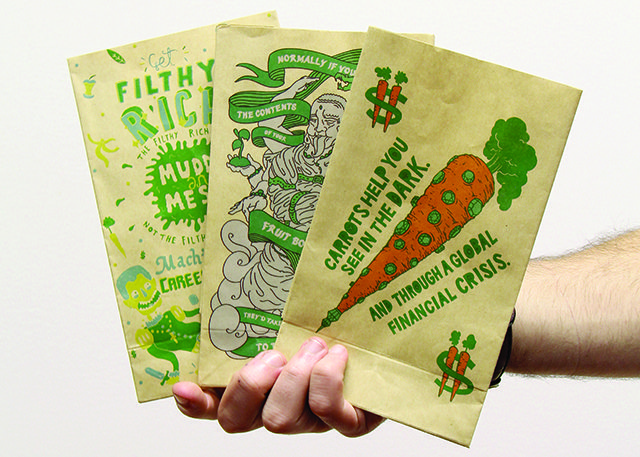 [line][pullquote width=”300″ float=”right”]It’s really simple! If you didn’t get an official We Compost Weekend bag in the mail, you can pick one up from any of the participating businesses.[/pullquote] [line]

How can Aucklander’s get involved?
It’s really simple. If you didn’t get an official We Compost Weekend bag in the mail, you can pick one up from any of the participating businesses (go to Facebook.com/WeCompostNZ to see who’s involved). Fill it with your food scraps like carrot peels, banana skins and apple cores. Then when this Saturday and Sunday, take it into any of the participating businesses to pay for stuff like coffees, muffins, pies or whatever they’ve decided to sell in exchange for your scraps.

Anything else?
Another really cool thing about the project is that we were able to get super talented locals to do the designs for the bags and posters.

A massive shout out to Toby Morris, Chris Hutchinson and Hugo Smith for the bags. And to Supercrafti, Ashleigh Yates and Jim Pachal for the sweet posters.

[line]To find out more about how you can get involved, all the local stores participating or just to say “hi”, visit We Compost’s Facebook page.[line] 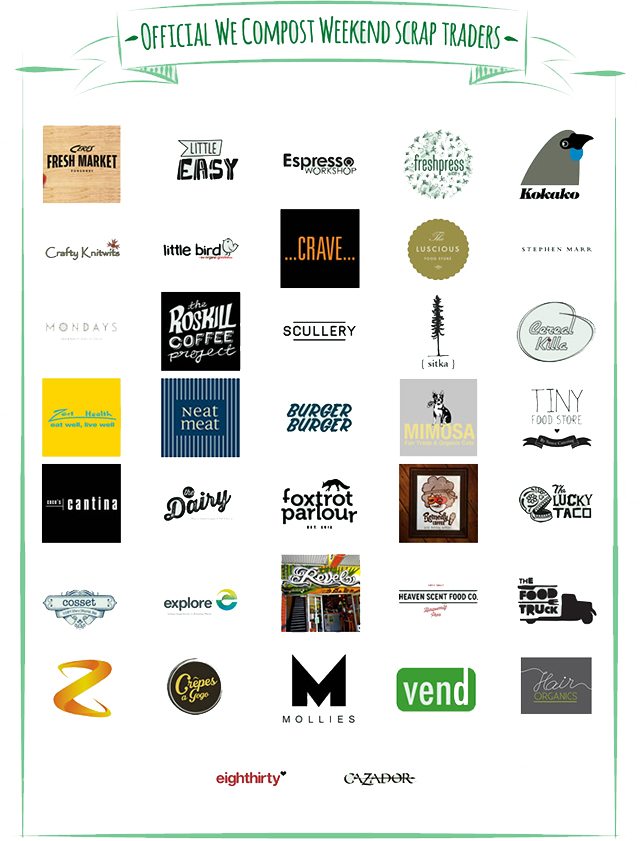 JAHEB LIVES IN AUCKLAND, NEW ZEALAND AND SPENDS HIS WEEKDAYS WORKING IN THE ADVERTISING INDUSTRY. IN HIS SPARE TIME HE'S OFTEN OUT SURFING THE COASTLINES, PLAYING TENNIS AND HITTING THE NIGHT LIFE WITH MATES. HE ‘S ON A MISSION TO HELP GUYS FEEL CONFIDENT IN WHO THEY ARE BY SHARING SOME THOUGHTS ABOUT MAN RELATED STUFF, FROM MEN’S STYLE, TO FITNESS AND HEALTH. YOU CAN DROP HIM A LINE AT JAHEB@THEUNIMPOSSIBLES.COM FOLLOW HIM ON INSTAGRAM _JAHEB