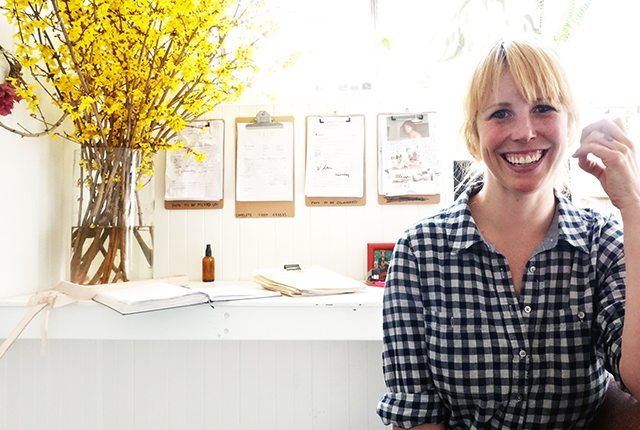 Poppy Lane is a beautiful example of how if you do what you love, trust your intuition and allow things to grow, great things will happen. As one half of Pop and Scott, Poppy’s pots are now an iconic piece of Melburnian design, however, unknown to most, the prodigious Charlie Brown printed pots were actually an accident – a result of an intricate series of events, which in a way choose Poppy and not the other way around.

Poppy tells us the full story of how these illustrious pots came to be, as well as how it is possible to cultivate your own success by doing what you love, a bit of strategic thinking and letting things happen in their own sweet time. It’s a bit like that Lao Tzu saying “Nature does not hurry, yet everything is accomplished”. 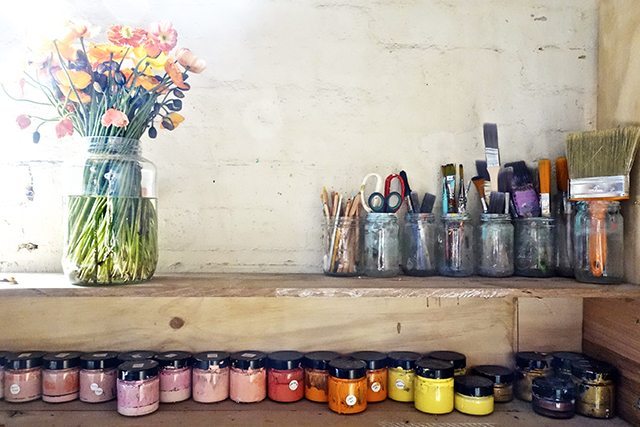 What did you study and what was your original career path?
I originally did my training in Floristry at a German Floristry School in Western Australia when I was 15. German floral design is about working outside of the traditional vase and involves installation work such as hanging pieces and structural sculptures with nature. 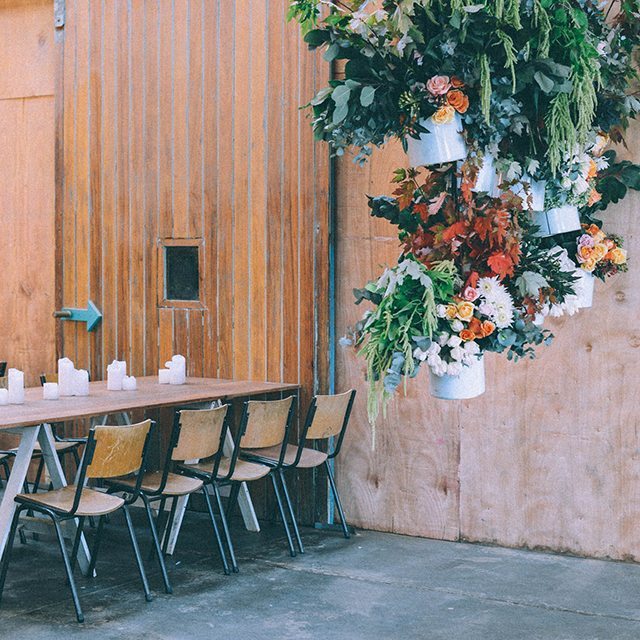 Give us a brief outline of your career to date:
I started working in boutique floral shops, then moved to Melbourne when I was 19 and kept working in similar boutique floral shops up until we started Pop and Scott. I have also done a lot of freelance work such as events, weddings and corporate installations. Being based in Armadale and South Yarra for eight years, I did flowers for Olivia Newton John, sent a posy to Elton John and that sort of thing. I still do flower work: Weddings, editorial, fashion, and installation work and that’s my main thing. 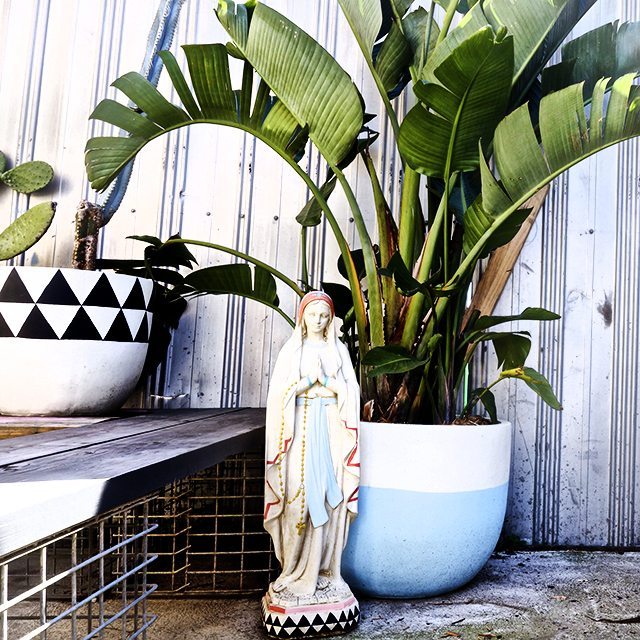 [line][pullquote width=”600″ float=”left”]Everyone sort of influenced everyone else’s work and collaboration started to happen which is how the Pop and Scott Co-operative came about.[/pullquote][line]

We randomly bought some really old Australian, German and Italian wood working machinery from the airport, where Scotty was working as a plumber at the time. Once we bought, it we needed a space to put it all. Originally we tried to find a smaller space for us and a few friends, but then we found this space here.

We built the workroom, as the original plan was to work on a furniture range together and I was going to continue to do my flower work on the side. The space, however, naturally evolved. For example, a friend who was an artist wanted a studio, so we built some studios. Then those got occupied so we decided to build some more as it is so inspiring being around creative people. Everyone sort of influenced everyone else’s work and collaboration started to happen which is how the Pop and Scott Co-operative came about. 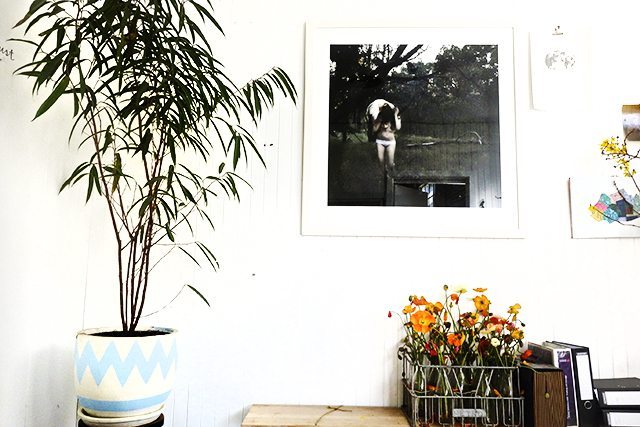 [line][pullquote width=”300″ float=”left”]The pots I didn’t plan to do, it was outside of my control and I just went with it.[/pullquote][line]

Where did the inspiration for the pots come from?
The pots I didn’t plan to do, it was outside of my control and I just went with it. I have been painting pots for a really long time with my mum who is an art teacher and a florist, and we have always had beautiful, colourful homes because of her. She has got an impeccable eye for detail.

Each year we used to paint the pots in the courtyard when we were doing a clean up – just like you would clean up your house and buy a new rug or something like that – we would paint the pots and plant a new plant. It was a constant thing and my mum has been doing it ever since I was a kid. 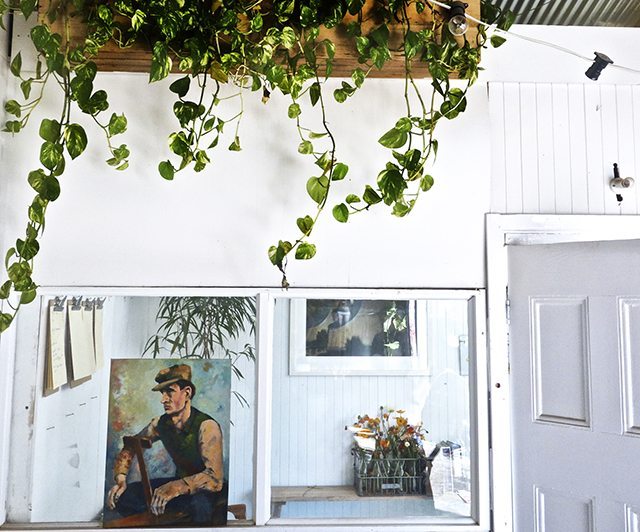 Your pots were kind of forced on you by Lucy Feagins of The Design Files, what was the story behind that?
Lucy was in the film industry and we met through my previous boss when I doing flowers for a movie she was working on. A girlfriend of mine, Kirra Jamison, is an artist and for one of her side projects she did a blog post of me making a meal in my old house, which was a beautiful one-bedroom house in Collingwood. Lucy saw the blog post and asked if she could shoot my house for TDF. Lucy is so incredible and she has done just amazing things for all artists and small designers. We were so excited she was going to share our home and possibly our workshop.

She hadn’t seen the workshop but there were a lot of cooperatives around at the time and she was a bit hesitant. However, a few months later she finally shot the house and came to the workshop the same day.

I had done two pots for the workshop, not for any purpose of selling them or anything like that and I had the big original Charlie Brown design in charcoal sitting in the middle of the workshop full of flowers and Lucy loved them.

Lucy begged me to do them for The Design Files Open House and I was like “no, no, no, that’s crazy, I don’t do pots”, but she was like “please, I think they will do really well” and I kept saying no. I was really quite embarrassed – I didn’t think it was something that people would want and I didn’t want to be known as a pot person – I was a florist!

However, she kept asking and I finally said ok and did them for her and it just went crazy – it took off, as there was a huge hole in the market for garden pots in a nice shape. 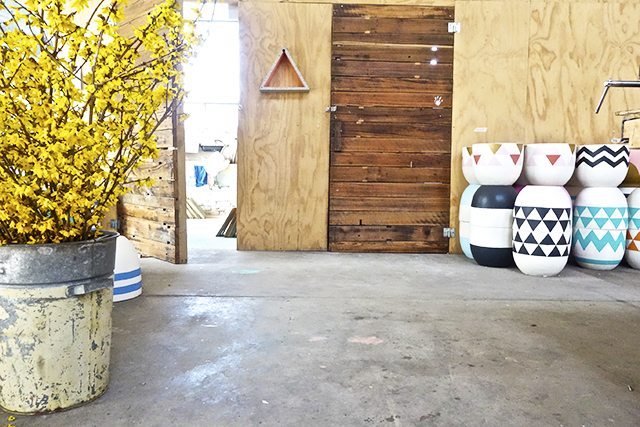 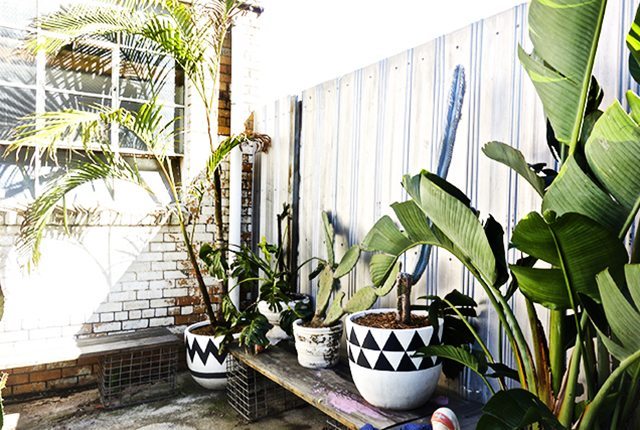 [line][pullquote width=”600″ float=”left”]When you let something happen in it’s own perfect time – it just works.[/pullquote][line]

That’s amazing, does all your work happen like that?
I think when you come into something organically, when it’s chosen you in a way, when you let something happen in it’s own perfect time – it just works. There have been things that we have tried that haven’t worked but generally it is something we haven’t thought about too much that works. Scott and I are really comfortable with who we are and what inspires us and that’s where it shows our personality in our pieces. That happens a lot in people who are really connected with their craft. My real passion is floristry. That is who I am, and I am happiest when I am doing a flower installation – although, I still get joy from sanding timber! 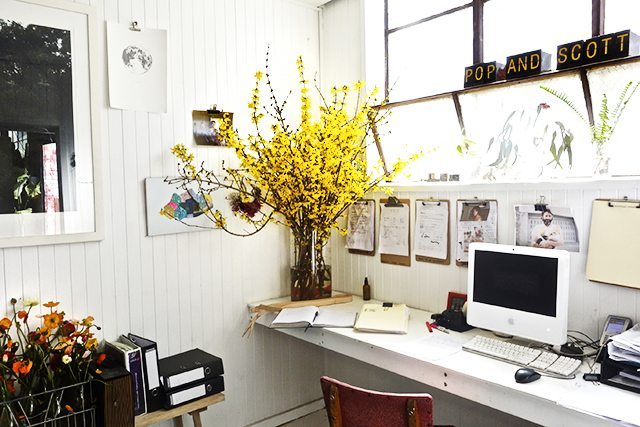 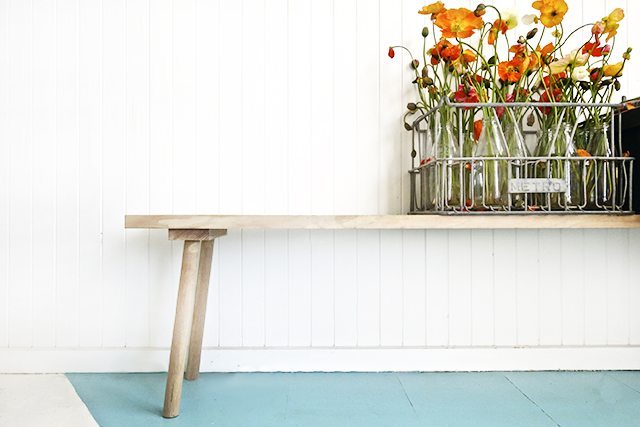 What about things that didn’t work out?
We made a day bed, which was awesome and it’s not that it didn’t work, but it was more like something we wanted to have at home just for us and we didn’t push it or enjoy the idea of selling it. There is someone here at the cooperative who does day beds and his designs are so beautiful that it’s like “well you know what? That needs to be made by that guy, not us”. Then things like we originally had a really straight leg on the bench in my office. We thought we really wanted that really straight look but it was so difficult to work with dowel that we ended up with an angle. So things like that we discover along the way through trial and error.

How do you feel now about being known as the pot person?
Now I am really into it and it really makes sense, as I love plants. So it was in there and I just didn’t know that is what I was going to end up doing. So now I am working on pot accessories, stands, features and new shapes. 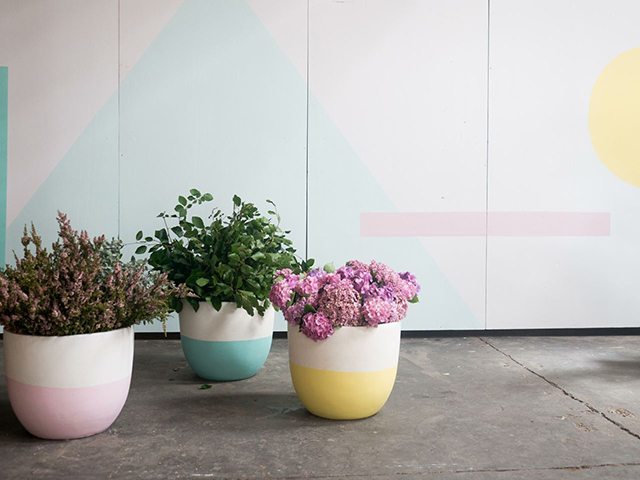 [line][pullquote width=”300″ float=”left”]So it was in there and I just didn’t know that is what I was going to end up doing.[/pullquote][line] 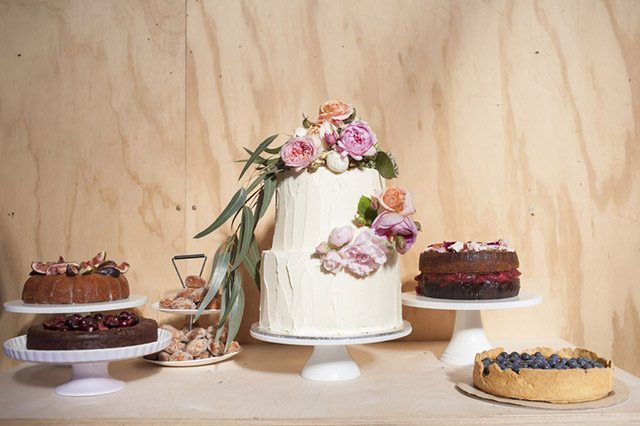 It seems that there is a lot going on, how does it all tie in?
Pots, studio, flowers – it’s all one. It all goes together. There is obviously the pots and then there is the range of furniture includes; swings, benches, stools, beds, tables, bedside tables, outdoor furniture to go with the pots.

We also have weddings here, which are amazing – they use our furniture and I do the flowers and it becomes a really beautiful space. You can see them on our blog. 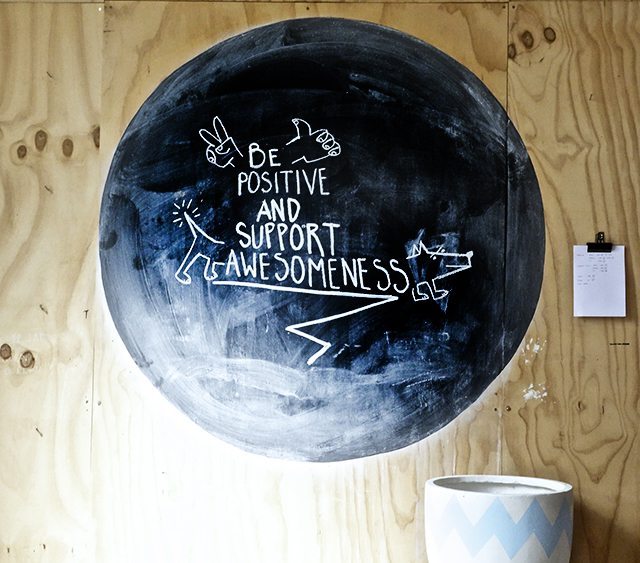 [line][pullquote width=”600″ float=”left”]You attract what you put out there. If you’re positive and supportive of people then generally they return the love.[/pullquote][line]

What are some of the unexpected things of running your own business?
You attract what you put out there. If you’re positive and supportive of people then generally they return the love. The pots have been really unexpected but everything else we made a conscience decision to do it and it was received well.

What are some of the ways to get your name out there?
Instagram has been incredible and is our biggest and most successful marketing tool. We try to post maybe once or twice a week – I don’t like to flood it and I am very selective of what I put on there.

How does Instagram translate to sales?
I don’t know – it just sort of does!

What advice would you give to someone starting their own business?
Stay true to yourself. Respect other artisan designers and just go for it. Let go and don’t be too concerned about what everyone else is doing. 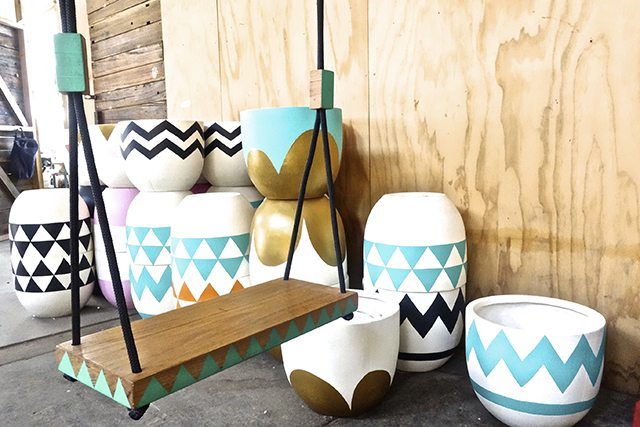 What is next for Pop and Scott?
We are working on opening a shop in November. Some people find coming into the workshop to pick up their purchases a bit intimidating as they feel like they are coming into our workspace, so the shop is going to be really beautiful with clean lines and then there will be a huge window that looks into the workshop so people can still connect with the process.

The shop will have pieces from everyone who is working in this space for sale. For example Steve does cement sculptures and is working on a stone masonry bench for us and then Bruce does ceramics and will sell beautiful ceramic lights as well as many other amazing artists and our pieces.

What would you say to your 21-year-old self?
Do exactly what you’re doing. It was awesome – I loved being 21. I was madly in love with a musician and having a really good time! 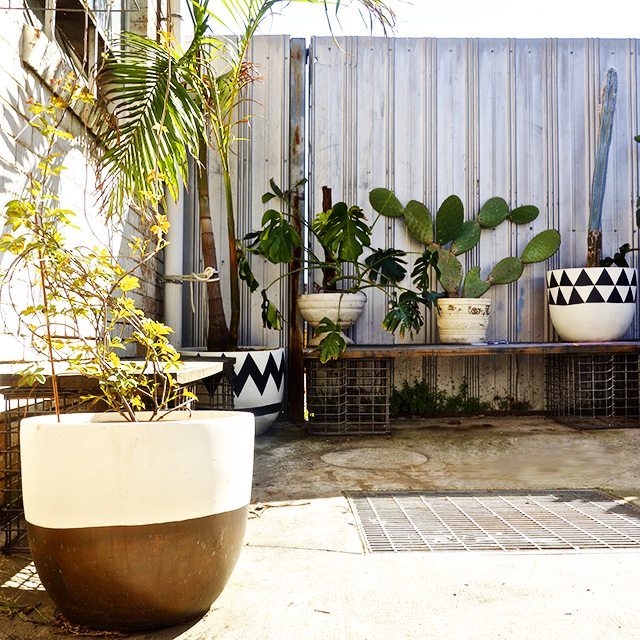 Who dead or alive would you invite to a dinner party and why:
Jimi Hendrix because my daughter Frida and I love Jimi (although she’s only 10 months she loves him!), Frida Kahlo and her husband Diego, Ray Eames (fuck Charles, I reckon he was an asshole!) and all the people we know now for extra excitement. Scott and I love a good party!
[line] You can find out more about Pop and Scott as well as purchase their awesome products at popandscott.com
[line]